Can Technology Change the Way We Speak?

In the last 11 years technology has had a major impact on the words that we use. Now I’m not talking about ‘LOL’, ‘BRB’ or other keyboard brevities. I’m talking about the actual words that shape our culture, and this is how…
In 1993, the American Dialect Society in Oxford together with a few other institutions began naming a word that had experienced a surge in popularity during that year.They call it (predictably) the Word of the Year or WOTY if you are partial to the aforementioned keyword brevities.

If you glance along the list of winners of the last 11 years you will notice a striking trend: 14 of the winners are technological terms. This led me to wonder as to the importance of this phenomenon, and what I found represents a decade-long transcendence into digital living.
In 1993, the chosen Word of the Year was ‘Information Superhighway’. From that point on technology took a position of dominance in the words coming out of our mouths. The words that followed were ‘cyber’ in 1994, World Wide Web in 1995, blog in 2004, podcast in 2005… the list goes on. Remember, these words were chosen as the word that represents an entire year’s progress as a civilisation.
In 1952, the Oxford English and Merriam-Webster dictionaries added the word ‘modem’ to their long list of cultural terms used to make up our wonderful English language. Five years later ‘computerize’ became official, closely followed by ‘techie’, ‘email’ and ‘mousepad’.
These subtle additions to the dictionary show our steady progression into a digital world. Once upon a time a personal computer cost $55,000 and a mouse didn’t exist. Since then, technology has flowed through the veins of society, eventually affecting every industry, business and hobby.
This trend shows a major shift in the way we communicate, learn and live our everyday lives. While the fact that technology plays a big part in our lives is not exactly mind-blowing, it has changed “the human ability to acquire and use complex systems of communication”, otherwise known as the tool of language.
The long list of considered words for 2014 included: ‘brogrammer’, ‘clickbait’, and ‘dronie’, all of which include some sort of technological device in their existence and creation. For every technological device that appears on the scene comes accompanied by an entourage of words used to describe the device’s actions, qualities or results.
For example, the technology used in the ancient art of viticulture (or winemaking to you and me):

In the wine country of Napa Valley, winemakers are using NASA satellites and small planes to capture infrared pictures to monitor ground conditions. Vineyards also use high-tech irrigation known as regulated deficit irrigation (RDI) as well as weather stations to help control pests. This blend of technology and grape-growing has created an entire glossary full of new tech terms to name and describe techniques used in Precision Viticulture:

Aspersion
Frost protection technique where overhead sprinklers are used to spray the grapevines with water, allowing the water to freeze and coat the young buds with ice at 0°C with the latent heat of freezing protecting them from damage from further temperature drops.
Biodynamic wine
Wines produced by the principles of biodynamic agriculture.
Dendometer
A device used to measure the swelling and shrinkage of the trunk of the vine in response to irrigation/water use.

These are just a few interesting words included in the jargon associated with Precision Viticulture. In each industry there are hundreds of words created to explain the changes brought by the digital era, all unique to their individual craft, hobby or industry.
Angus Stevenson of the Oxford Dictionaries Blog posted that,“New words, senses, and phrases are added to Oxford Dictionaries Online when we have gathered enough independent evidence from a range of sources to be confident that they have widespread currency in English. Publishing online allows us to make the results of our research available more quickly than ever before. Each month, we add about 150 million words to our corpus database of English usage examples collected from sources around the world.” 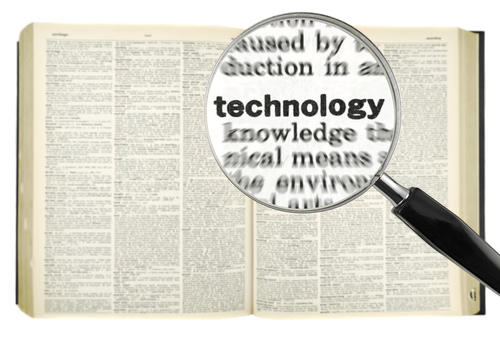 150 million words added to a database every month! If that doesn’t impress us, nothing will. Stevenson is explaining how not only are new words added, but also changes to the meaning of existing words and symbols. For example, the number or pound sign (#) is now known as the hashtag and has a multitude of new uses. Oxford tracks these uses and phrases associated with the symbol in their massive databases to provide the English language with clear cut rules and examples based on societal norms.
He continues, “We use this database to track and verify new and emerging words and senses on a daily basis. On average, we add approximately 1,000 new entries to Oxford Dictionaries Online every year, (compare this to the 368 added in 1965) and this quarter’s update highlights some fascinating developments in the English language. Portmanteau words, or blends of words, such as phablet and jorts, remain popular, as do abbreviations, seen in new entries such as srsly and apols.”
Although only 1,000 words are added every year, this doesn’t mean that we don’t frequently use words that haven’t earned an official spot in the dictionary. Words and phrases formed through technology are quickly becoming our dominant language. This phenomenon, while slow in the beginning, is quickly gaining speed. All in all, we can look forward to ageing peacefully and spending our days asking the young whippersnappers, “What does that mean?”
Oh and by the way, the word of the year for 2014 is ‘vape’ – the technological equivalent of a cigarette. I personally was hoping for something more exciting, but oh well I will look forward to  next year.

If you think that Oxford’s database is impressive, check out the power behind Midphase for all of your web hosting needs.